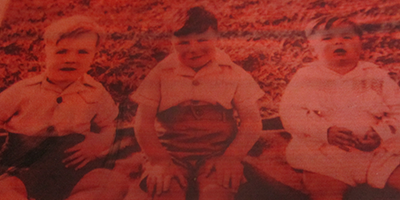 Born into a large Lebanese family in New Zealand in 1946, Fred George is the founder of George Publishing Company and author of the amazing but true autobiographical account, Switched at Birth: My Life in Someone Else’s World. George grew up on the south island of Dunedin in a large Lebanese family. He remembers always feeling out of place with the family that raised him, but he has now found a home in Pembroke, MA where he lives with his wife, Paula.

His story has appeared on the front page of the Boston, MA area newspaper of record, The Patriot Ledger, has made the rounds on Fox News, and been heard on numerous radio stations across the country. The day before the last election, George even received a call from the senior writer of People, wanting to know of his unbelievable but true-life story. “My story can help people with DNA issues,” he says.

After finding out the truth about who he really was and how what seemed like a simple mistake made by a hospital nurse turned out to twist the paths of two young lives forever, it's not surprising Fred George is a strong advocate for old adages like “Trust, but verify,” and “Measure twice, cut once.” To that end, George strongly endorses certain devices that can help the rest of us during our own moments of absent-mindedness.

To make sure that he never suffers the embarrassing mistake of leaving his keys at home, in the car, or at the office, George never leaves the house without his indispensable custom-made key fob at his hip.

The ingenious little device keeps his house and car keys right where he needs them at all times and attaches easily to any belt loop in just a couple seconds. It's got a stretchy cord that comfortably expands up to 30 inches so there's never a need to detach it from your side.

Switched at birth by a nurse who made a simple yet profound mistake, there's no possible greater authority on what it's like living your own life while being somebody else than Fred George. Learn more about Fred George's amazing story of being locked out of his own life for 57 years and pick up an indispensable key fob, so you don't get locked out of yours!